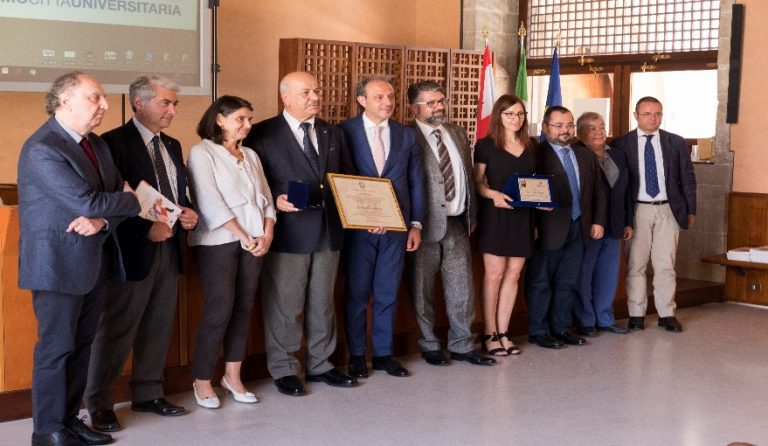 Dr. Jurjus holding the Prize and the Seal of the University of Palermo

On June 21st, 2017, The Palermo University Prize has been awarded to Professor Abdo Romanos Jurjus for his dedication to the advancement of health and medical research between the AUB-Lebanon and Palermo-Italy.

Dr. Abdo Jurjus has been a Professor in the American University of Beirut, Faculty of Medicine, Department of Anatomy for more than 40 years and has established and maintained many international collaborations with the USA and various European nations. This Prize commemorates a very productive 10 year collaboration as stated by Prof. Angelo Leone, the person in charge of the International Scientific  Program. The President of Palermo University Prof. Fabrizio Micari described Dr. A. Jurjus as a distinguished professor of Anatomy, a well-established researcher of international reputation with a solid career in medical education. In turn, the Honorary Counsel of Lebanon in Palermo Dr. Khalil Fattouch, stressed the fact that Lebanon, all through history, built cultural bridges with Palermo and Europe, and promoted scientific achievements by pioneers like prof. Jurjus. Professor Francesco Capello from the University of Palermo stated that “the didactic and scientific commitment of Prof. Jurjus is commendable if one thinks about the indescribable difficulties caused by the many conflicts that have affected Lebanon and the neighboring regions all these years”. Prof. Capello also added that “Prof.Abdo Jurjus is an exemplary figure of fairness and intellectual honesty for young people who decide to undertake the tiring course of scientific research”.  The ceremony took place in the Magna Hall of the University in Italy where Professor Jurjus received the Prize and delivered a speech, it was followed by a gala dinner during which a book printed in honor of Professor Jurjus, on this occasion, has been distributed