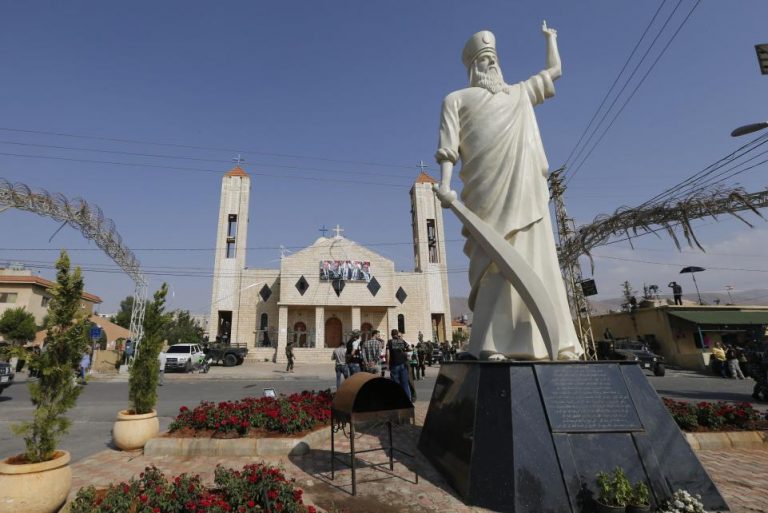 ISIS IN LEBANON: THE COURAGE OF A CHRISTIAN TOWN ON THE FRONTLINE OF JIHAD

Qaa, LEBANON—On the morning of June 27, 2016, Yosef Farris awoke, like most in the Christian town of Qaa, around 4:10am to the sound of an explosion. A policeman, he rushed toward the town center. On the way, he heard a second explosion. Then a third. By the time he arrived at the scene of the explosions, he saw what little remained of his brother, George.

Moments before, George, a Lebanese Armed Forces (LAF) veteran, had tackled one of the suicide bombers to the ground. The bomber then detonated his bomb, killing them both. George almost certainly saved lives, but his wife Donia, standing nearby, was critically wounded in the blast. Yousef rushed to his sister-in-law, whose torso had been ripped apart. Moments later a fourth suicide bomber emerged, who was shot and wounded, though he still managed to detonate his vest, injuring several more citizens of Qaa.

By 4:30am, the town had endured four suicide bombers in an area of perhaps fifty yards. The attacks claimed five lives, including George, and wounded nineteen.

The terrorists weren’t finished. Several hours later, as Qaa was tending to its wounded and mourning its losses, four more suicide bombers attacked, this time closer to the town center, where a statue of St. Elias stands. The police suspected they’d been hiding in a nearby alleyway. The first ran past the statue toward St. Elias church.  Seeing that he was a terrorist, policemen shot him dead. Three more emerged in rapid succession, blowing themselves up and wounding thirteen more residents.

One year after the suicide bombings, a monument to the five men who were killed stands near the St. Elias statue. Yosef does his best to care for George’s widow, who needs constant medical attention, and his brother’s two children. In Yosef’s home, in the company of family, there is anxiety over Donia’s medical care. Her bills after three months were over $200,000. “If you don’t have money or insurance, you die at the hospital door,” the interpreter says. Some philanthropists in Lebanon’s Christian community are helping the surviving families of the Qaa attacks.

Qaa has now become a symbol for the courage of Christians of Lebanon—and not for the first time. During Lebanon’s civil war (1975-90), Qaa’s Christians were the target of sectarian attacks and, later,on the receiving end of regime brutality during the Syrian occupation, which only ended in 2005 after the Cedar Revolution. 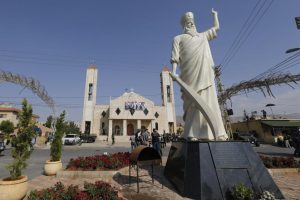 A statute of Saint Elie stands in front of a church where suicide attacks took place earlier this week in the town of al-Qaa, near the country’s border with war-ravaged Syria, on June 29, 2016.JOSEPH EID/AFP/GETTY

To the East of Qaa is the Anti-Lebanon Mountain range, beyond which is Syria. In the mountains, perhaps two miles from Qaa, are several hundred ISIS fighters, who are suspected of carrying out the attacks. ISIS, or Daesh as they are called in most of the Middle East, are largely encircled by enemies near the Syrian border but remain a threat to Qaa. Three miles to the North is the Syria, whose regime murdered scores of Qaa’s Christians, including the father of the current mayor in a purge in 1978. To the South and West are areas sympathetic to or controlled by Hezbollah. It’s not enviable geography.

“We will never abandon Qaa,” said Qaa’s mayor, Bachir Matar. “For forty years we have been attacked. One hundred fifty of our people have been martyrs. First the Palestinians, then the Syrians, and now Daesh. We won’t be driven out by Daesh.” He is busy with local leaders planning a prayer vigil at 4:30am the next day to commemorate the anniversary of the attacks and Qaa’s victims.

The five men killed by the suicide bombers were all LAF veterans. “Eighty percent of the men have served in the armed forces,” says George Saad, the ranking policeman on the scene. Even many of the women of Qaa, who were photographed in the aftermath of the attack wielding Kalashnikovs, have served in the military.

For more than six years, Lebanon has avoided being dragged into the Sunni-Shia struggle that has engulfed much of the region. However, the Syrian refugee crisis threatens to destabilize Lebanon, which would compound the region’s refugee crisis. Lebanon has the largest per capita refugee population in the world, which threatens to upset Lebanon’s fragile demographic—and political—equilibrium.

Further concerns about instability in Lebanon emerged when the Trump administration announced its plan to cut funding to the LAF, a move that experts fear could strengthen, not weaken, Hezbollah and regional power Iran.

Many in Lebanon say, “Lebanon is the front line for the West.” If Lebanon should be overrun by Islamists, they believe Europe will be next—making the terrorist attacks of today seem mild by comparison. The comparison with the West is frequently on the minds of the citizens of Qaa.

“The British had three terrorists over many weeks,” says Matar. “In Qaa, we had eight in one day. And we saw to it ourselves.” Yosef voices a similar sentiment. “America had nineteen attackers and that led to a global war. We had eight and no one even knows about it.”

The isolation of Qaa may be both psychological and proximate, but they remain heroes in the minds of the Lebanese people, who long for the fragile peace to hold.

Andrew Doran is vice president of In Defense of Christians, a Washington D.C.-based nonprofit nonpartisan advocacy group for Christians and other religious minorities in the Middle East.